Ideas for Using Visual Thinking in the Classroom from GradSTEP Participants

At the end of my GradSTEP workshop Saturday, “Show and Tell: Using Visual Thinking in the Classroom,” I asked participants to doodle their ideas for incorporating visual thinking tools in their teaching on large Post-It notes. I then had a few helpers collect these Post-Its and place them on the board at the front of the room, with ideas that involved student-created visuals at one end and ideas for instructor-created visuals at the other end. I promised the participants that I would share their ideas here on the blog, so here we go… 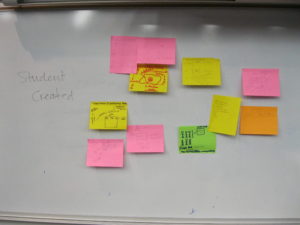 Above is the cluster of ideas for student-created visuals. Click the picture to see a larger version. Participants identified ways to have students create and use concept maps, word trees, flowcharts, timelines, and Prezis. For instance, here’s a lesson plan built around a word tree, like this Alice in Wonderland word tree: 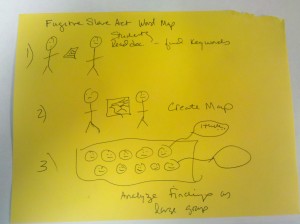 The phrase “adopted volcano” caught my attention in this participant’s idea about using coordinate axes: 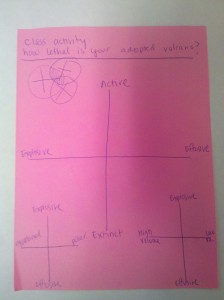 And this participant was inspired by my Post-It activity to try something similar on the topic of constitutional powers: 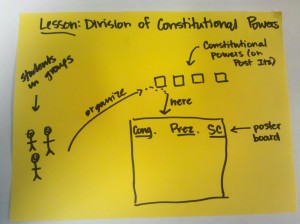 Zooming back out, here are the participants’ ideas for instructor-created visuals, including timelines, concept maps, and better PowerPoints: 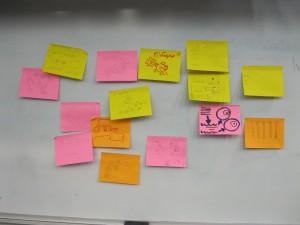 I’ll admit that I don’t really understand what some of these Post-It notes are meant to convey! For instance: 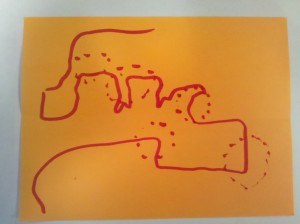 But other participants doodled fairly comprehensive approaches to using visuals. Here’s one that rejects boring PowerPoint slides for what looks to be Prezi: 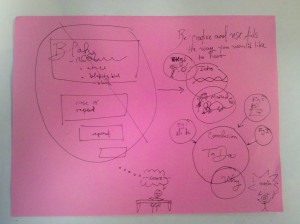 And here’s a plan for a lecture about psychopathy that features multiple visualization tools, including film clips, metaphorical images, and student-created Prezis: 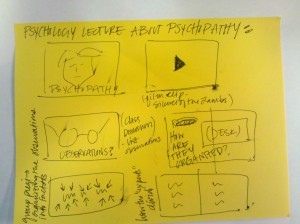 The Post-Its placed on the middle of the board were supposed to feature ideas somewhere between student-created and instructor-created.

As it turned out, there were mostly just cryptic, like this one that clearly represents something interesting: 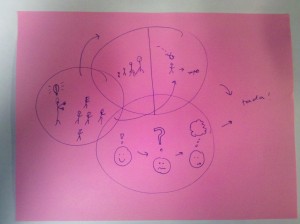 Other Post-Its in the middle of the board seemed to be meditations on the nature of visual thinking, like this lively one: 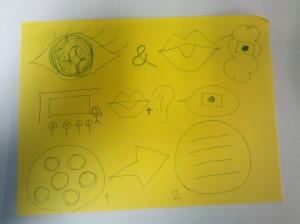 Thanks to all the participants for attending the session and sharing their ideas!