From a Student’s View: What Does an A Mean? 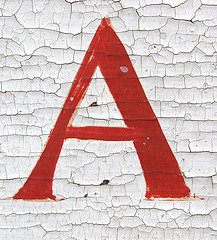 This is a guest post by Xiaoyu Qi, Vanderbilt Class of 2012, the first in our spring “From a Student’s View” blog series. We occasionally feature guest posts here on the blog as part of our efforts to cultivate dialogue about teaching and learning among Vanderbilt faculty, students, and staff. We recognize that everyone’s teaching context is different, but we hope that hearing others’ perspectives on teaching and learning will help our readers reflect on their own teaching. If you would like to contribute a guest post, please let us know.

Xiaoyu’s post is a response to this prompt: “What does an A in a course mean to you?  Does it say something about what you’ve learned or how hard you’ve worked—or some combination of the two? Or something else entirely?”

A couple of semesters ago, I took a seminar in which there were no assigned readings and no exams, and every single student received an A. That same semester, I took a math class in which the As were not only scarce, but seemingly impossible to attain. I count both among my favorite classes taken as a Vanderbilt undergrad. Perhaps more significantly, the As I made in those two classes mean roughly the same things to me: The material was thought-provoking and challenging, the professor engaging and demanding. I had to work my butt off, and in the end the quality of my work surpassed my own expectations.

Not all the courses I have taken at Vanderbilt have painted the same idyllic picture of academia. Sometimes the material is only mildly interesting, the lectures dry—or worse, irrelevant and unnecessary—and my only memory of a course is that I took it. The fruit of my labor is just another check mark on a long list of major, minor, or AXLE (liberal arts) requirements. I endure these classes because I know they are a means to an end. The A I strive for, in this case, means considerably more than effort or performance in a class for which I obviously care very little. My ultimate goal is an unblemished transcript that will translate into a competitive job offer or graduate program.

Some examples might be illustrative: I received an A in a large lecture class despite skipping at least once a week, sometimes missing several days in a row.  I received an A in a course despite having bombed the first midterm, because there was a generous grade-replacement policy outlined in the syllabus. (I knew this, so I decided to forgo studying for that midterm in favor of another, irreplaceable one.) I don’t feel too badly about these As. I pulled them off by studying extraordinarily hard for the (other) midterms and final exams. Yes, from a practical standpoint, I probably didn’t retain as much from those classes as I would have had my efforts been more consistent throughout the course. But from a purely empirical standpoint, my “performance” measured up to that of everyone else receiving an A.

But it does get worse: I once received an A in a course whose requirements resembled that of a class I took as a high school freshman. I received an A in another course by spending a few hours before the final exam memorizing a handful of definitions. Today, I couldn’t tell you anything about the topics of those courses if asked. These are the As that even I as a student feel were somewhat ill-deserved. They don’t mean a whole lot to me as a measure of my performance or even my effort—both were only marginal. These As disappoint the part of me that idealizes learning, that thinks grades should measure performance. Period. The pragmatist in me knows… if given the choice, I probably wouldn’t trade a transcript full of As for a mediocre one, even if the latter reflected a far more challenging and rewarding academic experience.

In my ideal world, every A on my transcript would reflect some significant academic achievement in my past. I don’t, unfortunately, have the luxury of living in a vacuum. I am remarkably aware of official and unspoken GPA requirements for the better graduate programs and better-paying jobs. As a student, I have loved courses heavy in academic rigor, but since I do not intend to pursue a Ph.D., I know it is the grades from those courses that will matter in the future, far more than the quality of papers I wrote, the number of lectures I truly absorbed, or even how great it felt to crack that really hard proof on my math final.