From a Student’s View: Distributions of Grades 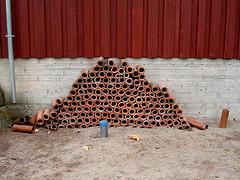 This is a guest post by Travis Meyer, Vanderbilt Class of 2012 and biomedical engineering major. The post is part of our spring “From a Student’s View” blog series. We occasionally feature guest posts here on the blog as part of our efforts to cultivate dialogue about teaching and learning among Vanderbilt faculty, students, and staff. We recognize that everyone’s teaching context is different, but we hope that hearing others’ perspectives on teaching and learning will help our readers reflect on their own teaching. If you would like to contribute a guest post, please let us know.

What is an appropriate grade distribution in class? When I glanced over a list of potential prompts for this blog post, this question instantly caught my eye. I’ve thought about it a lot, and I still don’t feel I have a single, concrete answer.  On one hand, like most students at Vanderbilt, I spent the majority of my high school career making As and Bs. The current college admissions system stresses the importance of the grade itself.  As a result, students have grown accustomed to desiring a high mark, regardless of what that grade actually signifies. With this frame of reference, a good grade distribution can be thought of, to some degree, as one that gives a large amount of As. However, as most students are fully aware, this is not actually a desirable outcome.  It may make many people happy in the short run, but it typically ends up doing more harm than good.

Ideally, I believe that grades should be a reflection of a mastery of the material of the class. As such, I don’t feel like grade distributions should even be a consideration for a professor. Tests are designed to gauge the amount of knowledge obtained by the student (or the ability to analyze and problem solve), and inherent in this concept is the idea that there is a certain level of competence that the professor expects. If a student reaches this level, they have demonstrated that they have learned what is necessary from the course and deserve an A. Conversely, a lower grade is expected if the student does not reach that level. Therefore, grades are entirely dependent on where the professor sets that level of competence. If the bar is set low and all of the students excel, then everyone deserves an A, because the entire class learned exactly what they professor hoped they would learn. The same should be true when a professor sets the bar for competence too high. If no one reaches that level, then, theoretically, no one should receive an A.

The problem with this approach is the need to use grades as a means of comparing students’ academic success. If two students learn the exact same material, but one takes a test written by a professor who expects a lot more out of his students, then their grades won’t reflect the fact that both students essentially have the same knowledge. I’ve been in several classes where the average grade has been in the low 50’s. This should technically mean that the vast majority of the class only understood roughly 50 percent of the material, and the grades should reflect that. Luckily (for the students in that class at least), the concept of “grading on a curve” is frequently used to account for the fact that different professors expect different things from students. With this philosophy, grade distribution should be a consideration for teachers.  As an engineer, I can appreciate the value and importance of statistics, and therefore I tend to believe that the typical Gaussian (normal) distribution of grades is the most fair. A small percentage of students, those that receive the highest marks, deserve the A’s, while the majority of the class should receive grades in the low B/high C regions. Therefore, the “best” students receive the best grades, regardless of how difficult a particular test or professor might be, allowing this grade distribution to remove the variability between professors.

Even after writing all of this, I still don’t know what I actually think a fair grade distribution is. It really all boils down to the role of grades, and whether they should be used as an absolute means of quantifying the amount learned or a relative scale used to separate students. And that is not a question easily answered.