Paul Morrow is a PhD candidate in the Department of Philosophy at Vanderbilt University.  He is writing a dissertation on the application of the concepts of conventions and social norms to theories of mass atrocity and transitional justice. Paul is currently teaching the McGill Seminar in Philosophy, a small seminar held each year in McGill Hall. Paul is using both digital archives and Skype to expand his classroom into the digital realm. 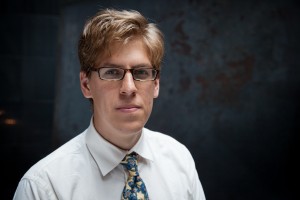 How did you get interested in using technology in the classroom?

In philosophy courses, it is fairly unusual to use technology.  I first became acquainted with my digital resources during a semester I spent at the Holocaust Museum in D.C. Some of the historians at the museum were doing really great digital projects, and though most of my research relied on secondary sources, they cued me into some of these archives, such as the Raphael Lemkin archive that I’m using in the class. Lemkin was the one who came up with the term genocide and really pushed for the genocide convention at the UN  All his papers are scattered across a couple of archives but the American Jewish Historical Society in New York has been digitizing a great deal of his papers.

The other archive is the Hannah Arendt Papers through the Library of Congress. Most of Arendt’s papers have been digitized, which is helpful because I was able to look at original documents related to her controversial study of the Adolf Eichmann trial in Jerusalem. For example, I was able to see the transcripts she received as a reporter for the trial, and where she marked up and underlined things that later became major elements of her book, Eichmann in Jerusalem.

How have you used these digital resources in the class?

In class, I used the Lemkin archive as the basis for a research and discussion assignment. Lemkin not only pushed for the genocide convention, but also wrote case histories of particular historical genocides. There about 30 to 50 of them, and I had the students research a few of these case histories online. I gave the students a handout on how to access the archive and asked them to tell me in advance which cases they selected so that I could read them as well.

We prepared for the case studies by reading Lemkin’s famous definition of genocide that he published during WWII in his book, Axis Rule in Occupied Europe. When we discussed the case histories in class, we used his descriptions of genocide and considered which elements were present in each case history. For example, we examined his description of the English treatment of the Irish in the nineteenth century.

What were the students’ reactions to using the archives? Did you think it was a helpful exercise to have them use the archive?

The students thought it was cool. Although much of Lemkin’s work is typed up, looking at his papers allows you to see the corrections he made in his own hand. You can see the ways in which he is trying to draw on the available historical record materials to make his case.

How does having students look at archives differ from what normally happens in philosophy classrooms?

So I employ a combination of both the more traditional straightforward philosophical articles and these digital resources. I used an article, which was on identifying groups, as a foundation for the using the digital materials, which to me seem like less of an arm-chair approach to philosophy. I think there is room for both though, and that this actually happens a lot in applied ethics courses.

What other technologies are you using in the classroom?

The other element is having a virtual discussion with scholars I met last semester at the Holocaust Museum. One of the presenters is a professor at the University of Dayton who is a political scientist, researching the campaign for human rights and genocide prevention in Darfur. Through Skype, she will give a lecture on current policies and nongovernmental organizations efforts at genocide prevention. I plan to later this semester return the favor by Skyping with her students.

And then the other example relates to one of the textbooks we are reading that includes many first-person interviews with survivors of various kinds of WWII. I have never worked with oral histories, but one of my colleagues at the museum has done this extensively, so I asked him if he would talk with the class about that experience of doing oral history around the war.

Overall, I’m excited about this project. I wanted to develop this–well, I’m not sure if it is a skillset or resource for doing philosophy classes. Obviously, these two examples are fairly targeted to the theme of this class, but I’m hoping some these tools will transfer to other courses. For example, for courses on logic or history of philosophy, you could find digital archives of Hobbes or Locke’s papers. While it is common in philosophy to assume that it’s really the ideas that count, and not their forum of transmission, I think for this course using digital resources has been helpful because some of these documents, such as the Lemkin or Arendt documents, are not available in any published edition.

How has using technology changed your teaching philosophy?

There is a sort of shared discovery process that goes on with these digital collections that would not be possible, at least not to such a great extent, with written materials. It would be unlikely that I would ever give a student an anthology of classical articles in political theory and say pick the two you want to read without already knowing the material myself. With these digital materials, since I’m not familiar with all of them, it has created the possibility of a more interactive process of discovery, which I think is very appropriate for this seminar style class.

Using other people to guest lecture is something traditionally that you asked of someone on campus. Resources such as Skype expand the candidate pool considerably. But I have not fully worked out the implications. Is it possible to go too far with these lectures, or is it simply the future given the nature of specialization?

Are there other technologies you would like to try in the classroom?

I’ll see how things go. I’m not sure if the possibility of archival material would come up in another class. In this case, it was fairly serendipitous that my own research sources have been useful to the course I am teaching. It would be interesting to try the reverse: looking for sources to teach with and seeing where that leads.