Posted by Rhett Mcdaniel on Thursday, December 8, 2011 in News. 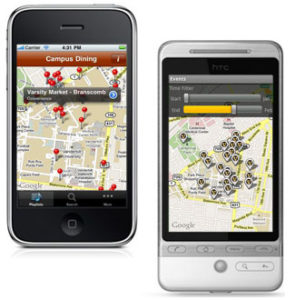 This week the Vanderbilt Mobile Application Team (VMAT) was profiled in Campus Technology. VMAT develops iPhone- and Android-compatible apps for the Vanderbilt campus, teaches dozens of students how to program mobile apps – which has become a lucrative business for many, including current and former members who have landed jobs across the country. Of note, is Chris Thompson, who started a company in Nashville that raised $1 million this year to bring to market a product, originally called WreckWatch, that was VMAT’s first program.

“VMAT demonstrated to the administration and other organizations on campus that students were very interested in putting their classroom-learned skills into practice to solve real-world problems,” said Chris Thompson. “This is something many students don’t get the opportunity to do in college. It also demonstrated that students could deliver well-written and functional software for a significantly reduced cost compared to traditional software-development processes.”

VMAT is one of many student organizations that encourages students to apply their classroom-learned skills to outside-of-the-classroom opportunities. Doug Schmidt, a professor of computer science and one of the faculty members who helped organize VMAT, echoes this in the profile by saying: “A key mission of Vanderbilt University is to help students become leaders of the future by encouraging entrepreneurship, technical excellence, and innovation, as well as honing their collaboration and communication skills.”

Look for more resources in the future from the CFT regarding co-curricular learning and teaching outside the classroom. For now, you can view resources on these topics: