The other week I blogged about one of the educational technology working groups the Vanderbilt Center for Teaching is hosting this year. That group is exploring the use of digital timelines in teaching. Another group, which I’ll discuss in this post, is looking at classroom response systems, one of my favorite edtech tools.

My book, Teaching with Classroom Response Systems: Creating Active Learning Environments, was published by Jossey-Bass in 2009. Back in 2009, classroom response system meant “clickers,” dedicated handheld electronic devices that students use to respond to multiple-choice questions posed by their instructors during class. Today, most students have some kind of mobile device (phone, tablet, or laptop) they can use to respond to polling questions during class, and so our working group is looking at options for a “bring your own device” (BYOD) classroom response system that the university might provide as a campus resource. 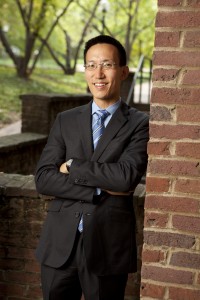 Although Vanderbilt working group’s primary goal is to recommend a BYOD system for adoption across campus, we’re taking time in some of our meetings to share and discuss the various ways we use classroom response systems to foster student learning. Recently, Edward Cheng, professor of law, shared a series of “old fashioned” multiple-choice clicker questions he has found valuable in one of his courses. I thought the questions were an excellent example of using multiple-choice questions, a format some instructors find limiting, to build and assess students’ critical thinking skills. I asked Ed for permission to share his questions here on the blog.

Ed described the series of questions as “review” questions, used at the beginning of one week to review material from the previous week. He starts with the following question, which he describes as a “gimme” question:

Carl keeps a pet rhinoceros within a double electrified fence. A severe storm knocks out power, and the frightened rhino breaks through the fence, rampaging through the neighborhood and ramming Jodi’s car. In an action against Carl, Jodi may recover:

This was apparently an easy question for Ed’s students, since 100% of them chose the correct answer (C). Notably, this question has a single correct answer. That’s because there’s a clear, unambiguous legal framework to apply to this particular case. (If I recall correctly, the fact that Carl was keeping a wild animal means he’s responsible for predictable damages, like the ramming of a car, even if he takes steps to prevent those damages. I am not a lawyer.)

Question #2 was much harder:

Same facts, though instead of ramming a car, the rhino runs through Jerry’s yard, breaking all of the irrigation pipes underground. (Rhinos can weigh up to the 5000 lbs, which is the weight of a large car). In a subsequent strict liability action for owning a wild animal, Jerry can recover:

This time, 76% of the students went with choice 4, which isn’t the correct answer. Only 6% of students selected the right answer, choice 3, although 18% of students were “half right” by picking choice 1. (I think the relevant bit here is that Carl couldn’t have predicted the damage to underground pipes, whereas he could have predicted the ramming of a car. Again, I’m not a lawyer.)

This was a hard question, but one with a right answer.1 Question #3 was a different kind of question entirely:

Carl keeps a pet rhinoceros within a double electrified fence near a large forest. Signs are posted throughout the fence warning passersby about the danger of electricity (and the rhino). On a dark, moonless night, Fran gets lost in the forest, and not noticing the fence, walks into it. Fran gets electrocuted. In action again Carl, she can recover:

This time, the students were split: 31% for choice 1, 39% for choice 2, and 31% for choice 3. As Ed noted, “This is a difficult, ambiguous question.” Here’s the deal with this question: it doesn’t have a single correct answer. A good lawyer could argue any of the three positions represented by the answer choices.

Ed had two goals in asking this question. Toward reviewing the previous week’s material, he wanted to see if students could muster specific arguments for the various positions represented here. Once the bar graph was on the big screen, Ed called on students to argue their cases, using the ensuing class discussion to guide students through the legal principles relevant in this particular case and help them refine their arguments.

Perhaps more importantly, Ed’s second goal was to help his students realize that they had moved from a situation in which there is a clear legal answer to one in which there is indeed room to make a case. Ed said that his students need to know when a question is a “gimme” (that is, when there’s only one way to apply the law to a given case) and when there’s room for interpretation and argument. He wants his students to recognize that difference, and then be able to make arguments for different positions within that gray area. That’s what “critical thinking” looks like in legal education, as I understand it.

Back in 2010, I wrote an essay called “Multiple Choice Questions You Wouldn’t Put on a Test: Promoting Deep Learning Using Clickers.” In that essay, I called this type of question a “one-best-answer” question, since it asks students to select the one answer they think is best from among competing options. Ed wouldn’t put question #3, as is, on a test, because multiple-choice test questions need unambiguous answers. (He could turn it into an essay question, of course.) But in the classroom, this kind of multiple-choice question can be very effective, at structuring and framing class discussion and at shifting students out of a black-and-white view of the world.