Posted by Rhett Mcdaniel on Wednesday, January 8, 2020 in Resource. 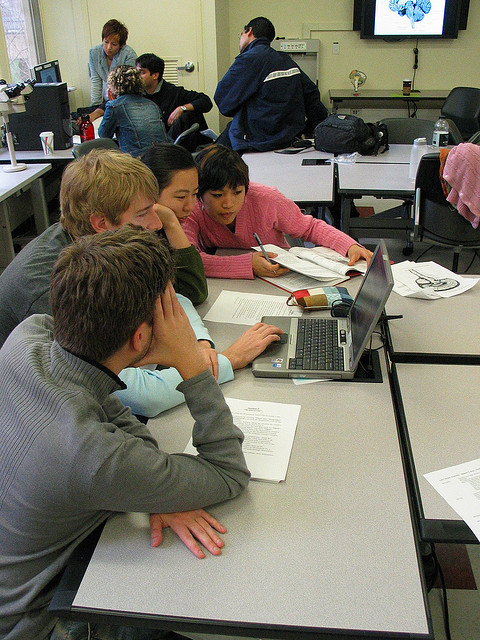 In my role as a Teaching Affiliate at Vanderbilt’s Center for Teaching, I lead an orientation event for a group of Biological Sciences Teaching Assistants (TAs). This orientation serves to educate new TAs about their roles, Vanderbilt policies, pedagogical techniques, and the types of students they may encounter. Importantly, as a strong advocate for inclusive teaching, I spend time discussing complicated topics that some students may be uncomfortable with, such as race, gender, class, disability, and more. We discuss these topics in the context of microaggressions and unconscious bias, which can be uncomfortable for a new TA to grapple with.

Some TAs have considered these topics before and are very comfortable with these conversations. In contrast, some TAs learn a whole set of vocabulary and address these concepts for the very first time. Because the TAs come from such different backgrounds and have disparate experiences, it can be very uncomfortable. Imagine a defensive new TA who is introduced to the concept of privilege for the first time while in a group of students who are already familiar with the concept. This TA may shut down immediately, resulting in a reinforcement of their biases and perpetuation of potentially negative behavior. Our goal must be to meet each TA where they are and to bring them to a space of greater understanding.

I have found that intentionally designed games can help to loosen up TAs and provide a lower-stakes environment for learning. Lowering the stakes and providing a more flexible atmosphere promotes curiosity among TAs and constructs an environment of mutual learning and understanding. These games provide a fun environment resulting in discussion and the opportunity for students to share and shift perspectives.

Two important topics of TA Orientation (TAO) are promoting a sense of belonging and grading fairly. Students’ sense of belonging in the classroom predicts classroom performance (Walton and Cohen, 2007). Additionally, individuals often grade members of their in-group (people like them) on potential, and members of their out-group (people not like them) on performance (Dovidio and Gaertner, 1993). What this means is, students who don’t feel like they belong may not perform to their best ability, which is important for TAs to know as they consider ways to help their students succeed in their courses. Thus, we can work to counter these effects by promoting belonging in our classrooms.

To demonstrate the effect of belonging, I generated a game to promote a sense of non-belonging in the TAO classroom. This game is called Analogies Quiz and it is a list of partially filledanalogies (one word pair, and one single word). The TAs determine the relationship between the first word pair, and then fill in the second word for the second word pair using the same relationship as the first. For example, the first word pair is puppy : dog. (Here, the colon is read as “is to.”) The single word is kitten : ____. The TAs should fill in the blank with a word that reproduces the relationship shown in the first pair. In this example, the relationship is baby form of animal : adult form of animal. The completed analogy, then, is puppy : dog as kitten : cat. I set up the game by telling the TAs that this quiz is very easy and demonstrates higher-order reasoning skills. I give them exactly one minute. During that minute, I repeatedly remind them how this quiz is very simple and demonstrates the kind of skills that a smart TA must have. I count them down until the time runs out, and I allow the buzzer to buzz obnoxiously, just to ramp up the stakes. Once the time has run out, we go through the answers. The answers to the questions are steeped in popular culture and appeal to a very narrow audience – an audience who knows about art, make-up, fashion, the Kardashians, and K-pop music.

Answer: Kylie, Kim, Khloe, or Kourtney. Here, the relationship is sister : sister, because Skipper and Barbie are sisters in the Barbie doll universe, and Kendall Jenner and Kylie Jenner, Kim, Khloe, and Kourtney Kardashian are all sisters.

Answer: Blue Ivy, Rumi, or Sir. Here the relationship is parent : child, because Lorelai is Rory’s mom on the Gilmore Girls tv show, and Beyonce Knowles is Blue Ivy’s, Rumi’s, and Sir’s mom.

When TAs get the answer correct, I lavish praise on them and make a connection or comment to something related to that answer, for example, “Yes! Don’t you love a-line skirts? They are so cute and easily layered in the winter!” When TAs get the answer wrong, I express disappointment, frustration, and annoyance that they do not connect to the things that I like, for example, “Ugh, doesn’t anyone else like K-pop? I bet you all listen to rock music or something.” In doing this, I am setting up the students who get the answer right as being like me, while the students who get the answer wrong are not like me. Importantly, all students – even the ones who get answers right – feel like the classroom is hostile, because someone is made to feel like they do not belong. We discuss the benefits of using culturally specific examples, such as some students feeling very enthusiastic about the topic. We also discuss the downsides, such as some students being confused about what we are even discussing. We conclude that culturally specific examples might be most useful in a one-on-one office hours setting. Further, if culturally specific examples are necessary to make the point, it is important to prepare multiple examples that will appeal to people from a wide array of backgrounds.

Finally, I have generated a game that encourages recall of the new concepts that TAs have learned during orientation called TAO Tabooã. This game works just like the original Tabooãgame: students are given a card with a word at the top. Students try to get their team members to guess the word at the top of the card – the goal word – by describing it. Beneath that word is a list of words the student cannot say. In the original Tabooãgame, the forbidden words are very similar to the goal word, making it difficult to describe. In contrast, in TAO Tabooã, theforbidden words are commonly held misconceptions or stereotypes about that word. For example, the role of a teaching assistant is often misunderstood and sometimes denigrated.Some common descriptions of teaching assistants include “know-it-all,” “scapegoat,” and “buddy.” By including those words on the forbidden section of the card, we are restricting their use of these stereotypes and misconceptions, and hopefully reinforcing true things about teaching assistants. In addition to misconceptions, there are also other meanings of the word outside of the TAO context. For example, one card has the word “ROLE” at the top. TAs are forbidden from describing the homonym “ROLL” by saying words including “SUSHI”, “TUNA”, “BREAD”, and “DOUGH.” Instead, TAs must reflect on all the different roles they may be asked to play in their new role. The goal of this activity is for new TAs to recall and describe these new concepts as they pertain to acting as a TA.TAO Tabooã provides a competitive environment by grouping individuals onto teams and strictly enforcing a time limit. This competitive environment results in TAs wanting to succeed in the game. We close out the TA orientation using this as a recall activity, and TAs remarked that it was helpful in synthesizing relevant new information.