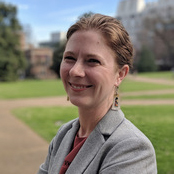 Certain classes stay with you, and HART-1330W Sacred Sites in World History is one of the classes for me. I still love to talk about the Stave Churches of Norway, which were the topic of my final paper and project. Another part of the class that I found very impactful was the class roleplay of the religious debate about the Temple Mount in Jerusalem. I reunited with my professor, Dr. Anna Guengerich, to discuss how she approached teaching such a sensitive topic and how she chose this activity to help her students appreciate that.

Sacred Sites in World History discusses how and why sacred spaces are created the way they are and what that significance is. Moving from the prehistoric to more modern times, we touched upon various sites, temples, and worship spaces. Eventually, we reached the Temple Mount in Jerusalem. A site of contention, the Temple Mount has religious significance to multiple religions and touches upon the greater political conflict in the region.

Guengerich has taught this course three times and had this activity in mind since the start. However, because of the sensitive nature of the scenario, she waited to implement it until the third year, my class, when she had experience and practice with the course. After giving us an overview of the site and assigning readings, she divided the class into five stakeholder groups, spanning religions as well as academic and historical perspectives. Assuming the mantle of each group, we then debated how access to the site should be mediated.

I was part of the UNESCO group, arguing for the historical and global significance of the site with preservation and education in mind. To say the least, the debate got lively. All the students seemed to be very engaged. We didn’t reach any sort of conclusion, which I think helped emphasize the true, messy nature of the debate. It also met one of Guengerich’s goals, something she often considers as an archaeologist whose subject matter may be centuries old:  the modern-day may seem far away from the material learned in lecture but that isn’t necessarily true. Activities like this help get students engaged and animated about it.

For other professors thinking about setting up a roleplay activity in their course about a sensitive or hotly debated subject matter, Guengerich had a few thoughts:

If Guengerich teaches this class again, she’d certainly want to repeat the activity but would consider pre-assigning the groups to give each more specific readings. I am very grateful that I got to participate in this activity and I’m sure it’ll stick with me, if in no other way than to remind me of how the past still matters today.