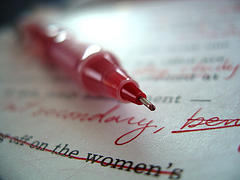 And just before [the subjects] start, they’re given a pen with which to do the corrections and mark the grade and that pen is either red or blue. And we found in this third study that the people with red pens assigned lower grades than the people with blue pens… It was about four points on a 100-point scale.

The study authors theorize that the use of red pens for test and paper corrections for decades has created an association in people’s mind between the color red and pointing out errors and mistakes. When instructors pick up a red pen for grading, the color of the pen subtly influences them to find more errors in their students’ work.

There may be something inherent in the color red that drives this association, but it may just be a socially constructed association. Were instructors to start using green pens for all grading, twenty years from now it might be that those using green ended up giving tougher grades.

What color pen do you use when you grade? Do you think color makes a difference?