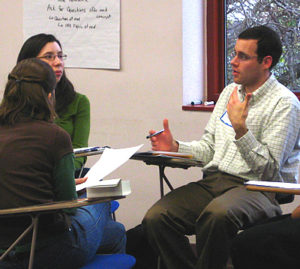 Reflections on GradSTEP from Manya Whitaker,
Facilitator of the Privilege and Power Session

Teachers walk a fine line between inspiring students’ latent interests and inciting students’ rage at having to work hard. What I mean is, teachers have the power to motivate the next Shel Silverstein, Albert Einstein, or dare I say it: Barack Obama. On the other hand, teachers also have the power to turn students away from learning, and possibly away from what they previously believed to be their passion. At GradSTEP 2011, the influence of teachers to affect and effect student growth was an underlying theme throughout many of the day’s sessions.

What stands out most for me from the conference is something said during the panel. At one point, in response to statements regarding motivating disengaged students, someone said ‘I try my best to reach all of my students, but if I see that they don’t care, I don’t care about them’.

My gut response when I heard that was: Oh no! Someone is going to be offended by that but…..I agree.

Too rarely in academia do people say what they feel. Anyone who’s ever taught a class, led a discussion group, or graded assignments has experienced the moment when you just give up on a student. It’s unfortunate that the words ‘give up’ have such negative connotations. Sometimes, it really is what’s best. Teaching may be one of those times.

Think about it: the time and effort you put into planning a class is a huge investment that could easily be wasted by one student who fancies themselves the class clown. Totally unfair.

As I left the panel and walked to my first workshop, I realized how the ideas of controversy and honesty are in fact, also issues of privilege and power: the very topic of my workshop. Who is empowered to be most honest in the classroom? Who has the privilege to say what they truly feel without facing personal or professional repercussions? What implications do these positions have on students’ learning? I immediately reconsidered what I wanted to do in my session.

We began by listing descriptors about ourselves and discussing ways in which our physical identity makes us appear (un)privileged to students. Some characteristics mentioned include:

We then reviewed a wonderful article – Social Class and the Hidden Curriculum of Work by Jean Anyon – that described four very different classrooms with varying teaching methods that directly dictated learning goals. Afterwards, we broke into small groups and studied three ‘real life’ case studies dealing with the manifestation of privilege in educational settings.

There were a lot of really good conversations about how to intervene in such situations and what the method of intervention means to students. We spent a lot of time talking about how a teachers’ presence or absence in controversial topics is itself, a pedagogical tool. To help wrap up conversations, I asked them the following:

“So as a teacher, would you avoid controversial topics in class to avoid displays of privilege/power?” Almost everyone said ‘no’.