Why Do Students Cheat? 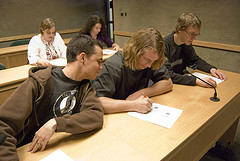 In preparing for this afternoon’s conversation on teaching, “Beyond the Quotation Marks: Preventing Plagiarism and Teaching about Academic Discourse,” I’ve run across a few resources that explore the question, “Why do student cheat?” Here are some possible answers to this question drawn from these resources…

In surveys, he asked students if they viewed bringing a cheat sheet to an exam as cheating. Most did. Then he asked the same students whether they would consider it cheating to bring a graphing calculator with equations secretly stored on it. Many said no, that wasn’t cheating.

Harding argues that when there is some form of technology involved, students become “detached” from the notion that their actions are cheating.  Perhaps storing equations in a graphing calculator is more like using one’s resources wisely than like cheating for some students? I’ve heard students argue that out in the “real world,” they’ll have ready access to equations and formulas, so why should they be prevented from accessing them during exams?

2. It’s not cheating if the assignment isn’t meaningful. Jeff Young’s article also quotes a student at New England College who indicates that some students don’t worry about cheating on homework.

“The feeling about homework is that it’s really just busywork. You just call your friend and say, ‘Hey, do you know the answer?'”

If students don’t feel that they are going to learn anything from a “busywork” assignment, perhaps they don’t feel as bad about copying a peer’s answers? If so, does this argue for giving students different kinds of out-of-class assignments? Or at least trying to convince them of the value to their learning of our current assignments?

“It seemed like it was the end of the world, and there was no way I was going to get the paper done,” she said. “It was already two in the morning. It seemed like the only option.”

“If it’s due in half an hour, I know I don’t have time to do it, so I’ll find somebody who’s better with words,” said a Weinberg sophomore, who spoke on the condition of anonymity. “I really don’t feel bad. I don’t feel like I’m hurting anyone.”

Mostly, though, cheating is not a result of students’ diabolical plans to sneak past their professors. Often cheating comes from a student who feels overwhelmed, underprepared and generally pressured to succeed.

At his talk last week, Richard Arum, co-author of Academically Adrift, noted a steep decline in the number of hours students spend studying outside of class in the last few decades. (Listen to our new podcast interview with Arum for more on his findings.) Are students spending less time studying because they’re cutting corners by plagiarizing? Or are students so busy with non-academic matters (friends, family, extra-curricular activities, jobs) that they don’t have time to writer their papers?

4. Today’s students have a different set of values they bring to the classroom. In an August 2010 New York Times article, Trip Gabriel raises the idea that students living in today’s digital culture don’t approach concepts like intellectual property and authorship in the same way that faculty do. Gabriel quotes Rutgers University student Sarah Brookover:

“This generation has always existed in a world where media and intellectual property don’t have the same gravity,” said Ms. Brookover, who at 31 is older than most undergraduates. “When you’re sitting at your computer, it’s the same machine you’ve downloaded music with, possibly illegally, the same machine you streamed videos for free that showed on HBO last night.”

Gabriel also points to a “mash-up culture” in which a creative work is judged on how well it blends together other work (without necessarily citing that other work), creating notions of authorship and originality very different from the traditional Western views on these ideas.

For example, consider the latest “album” from the DJ known as Girl Talk, All Day. It consists entire of samples of other artists’ music–372 samples in all. Benjamin Rahn has created a nice visualization of the album and its samples that gives a sense of the scope of this project, and NPR’s On the Media featured an interview with Girl Talk in March 2010. What can we learn about how students view plagiarism from the popularity of Girl Talk’s work?

While today’s conversation on teaching will focus on ways that instructors can prevent plagiarism and teach about academic writing, I’m sure that some of these ideas about why students cheat will come up in the discussion. Hope you can join us! And for more on this topic, see our updated teaching guide on cheating and plagiarism.