See What I Mean: A PowerPoint Makeover

This is a guest post by Emily Bigelow, a doctoral student in Teaching, Learning, and Diversity. The post is part of our spring “See What I Mean” blog series highlighting the effective use of visuals in presentations and lectures.

I attended CFT assistant director Derek Bruff’s GradSTEP 2011 presentation on using visual thinking in the classroom hoping to pick up a few ideas to jazz up my teaching.  Little did I know, it would change the way I think about using PowerPoint for instructional purposes.   I initially thought that improving my PowerPoint presentations would be as simple as adding pictures to existing slides.  However Derek’s presentation made me think about PowerPoint from a different view point.  Rather than considering slides as tools for making sure students are exposed to all the information in a lecture, I began to see my slides as a way to help my students understand and remember that information.

I’m teaching a course for elementary education majors on language arts teaching methods.  One of the key concepts in this course is the process of the Authoring Cycle in which the author brainstorms, drafts, revises, edits, and finally publishes her writing (Harste, Short, & Burke, 1988).  For an upcoming class session on the Authoring Cycle, I used the notion of a visual metaphor to transform a PowerPoint presentation on the topic I gave last year into one with less text and more meaningful images.  I first removed any introductory or extraneous slides, so that only the most important slides remained, making sure that I did not leave out any key points.  Next I moved the text on these remaining slides down to the notes section, so that it would only be visible to me before and during my presentation.  I then began to decide how best to represent visually the points I wanted to make.  For instance, I used an image of a dump truck to represent the drafting step in the Authoring Cycle to signify that, when drafting, writers should “dump” as much text on the page as they can.  Like a big pile of dirt, this may be messy, with little attention to grammar or other conventions, but it makes a useful foundation for the next step in the cycle. 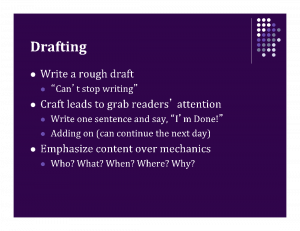 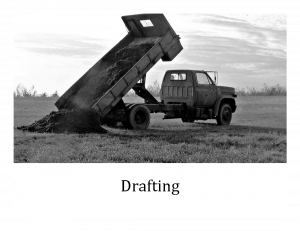 For the revision slide, I chose a large picture of an eye to represent the idea that during this stage, writers need to “see again” or “re-vision” the writing.  While this metaphor is not new to describing revising, I hoped that using this strong image would help students remember the idea. 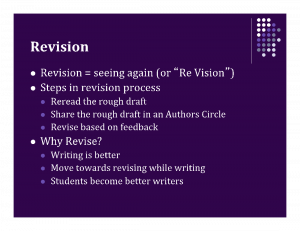 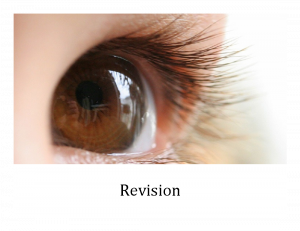 While it is sometimes difficult to tell if something works or not in the classroom, the students were engaged and attentive during the presentation.   Instead of frantically copying the text from the screen, students used a basic outline that I had provided with the titles of each stage in the Authoring Cycle to write down key insights.  In addition, the comments and questions that students came up were thoughtful.  Moreover, five weeks later, when students took the midterm, over half the class drew on the dump truck metaphor and all the students used the term re-visioning when describing stages in the Authoring Cycle.

As the semester draws to a close, and class time is focused on how to implement the Authoring Cycle in various classroom scenarios, it is obvious from student discussion that they have a deep understanding of this framework.  One student even suggested using the pictures from my PowerPoint as a visual aid in a poster for an elementary classroom to help students remember the steps in the Authoring Cycle.  Not only did the students grasp the concepts, but they also were able to understand the strategy of visual thinking when thinking of ways to teach younger students.

We occasionally feature guest posts here on the blog as part of our efforts to cultivate dialogue about teaching and learning among Vanderbilt faculty, students, and staff. We recognize that everyone’s teaching context is different, but we hope that hearing others’ perspectives on teaching and learning will help our readers reflect on their own teaching. If you would like to contribute a guest post, please let us know.