From a Student’s View: Group Work

Posted by Rhett Mcdaniel on Wednesday, November 28, 2012 in News. 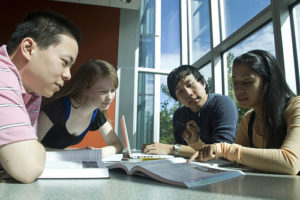 This is a guest post by Erin Baldwin, Vanderbilt Class of 2014, College of Arts and Sciences. The post is part of our ongoing “From a Student’s View” blog series. We occasionally feature guest posts here on the blog as part of our efforts to cultivate dialogue about teaching and learning among Vanderbilt faculty, students, and staff. We recognize that everyone’s teaching context is different, but we hope that hearing others’ perspectives on teaching and learning will help our readers reflect on their own teaching. If you would like to contribute a guest post, please let us know.

I recently sat down with Sarah DeAgostino, a junior in the College of Arts and Science, to discuss her experience so far with group work in the Vanderbilt classroom.  Sarah is a Political Science and Psychology double major, both of which require occasional group collaboration, but also a Corporate Strategy minor which has many classes centered around the group dynamic.  Sarah estimates that during her time at Vanderbilt so far she has participated in six group projects ranging from simple group discussions to semester-long projects encompassing many graded group assignments.  Currently she is taking two classes which require extensive group work: PSCI 264 Global Feminisms and MGRL 198 Corporate Strategy.

Our conversation began with a discussion of some of the assignments Sarah has had to complete in a group setting.  She gave several examples of several instances, including one project where where she had to give a group presentation about feminist activism in Africa and another where she worked with a group the entire semester to design and test a psychology experiment.  She said typically the portion of the grade that reflect group work varies and is tied to the intensity of the project (shorter projects requiring one group meeting or which can be done over e-mail are usually weighted less than a semester’s worth of weekly group meetings). Sarah reported that the larger projects usually encompass several due dates or presentation dates so that groups can pace themselves on assignments and receive feedback on their work.

On the topic of group assignments Sarah said that most professors chose the size of the groups then allowed the class to divide themselves accordingly.  On this matter she noted that groups tended to be comprised of students who knew each other previously (like through a Greek organization) or groups who ended up together because they all knew no one in the class to pair with.  Some groups then were used to each other’s personalities while others had to get used to working with group mates they had just met.  Choosing groups did not necessarily put some at a disadvantage, but it did give some a head start so to speak.

Sarah said that overall she prefers to complete individual assignments, in part because group work tends to be inefficient.  She recounted multiple experiences where a group met for two or more hours but only accomplished a fraction of what she believed she could have gotten done had she been able to work alone.  Sarah noted that in groups one of either two situations usually occurred.  Sometimes no one took charge and group meetings were drawn out from a lack of members contributing.  Sarah attributed students’ unwillingness to take on the extra work of being “the lead” to the fact that everyone would receive the same end grade.  The alternative was on student directing the group, sometimes in the wrong direction and without others’ input, which discouraged participation from the rest of the group.  She said that both scenarios can be frustrating, “time-wasting” situations, sometimes made worse by having group members that skip meetings regularly, burdening the rest of the group with their work.

One remedy Sarah discussed to the problem of low group participation was the group evaluation which professors often require at the end of the semester.  These forms usually allow students to evaluate their group’s members as well as themselves.  While she liked this idea in theory and said that she herself was driven to participate as fully as possible because of these reports, she also recounted experiences where students (who were aware of the evaluations) still did not participate. Ultimately these reports only serve as a persuasive tool if everyone in the group is motivated to the same degree by grades.  If one person does not mind a lower grade they could participate less and receive lower evaluations while making others work even harder for a good grade because they are doing more of the work.  Sarah said she would not get rid of student evaluations, but would include them periodically through the semester so professors could be award of ongoing internal problems in groups.

Finally, when asked whether she would like to see group work disappear from the Vanderbilt curriculum Sarah responded that she had never been dissuaded from taking a class because of a group assignment on the syllabus, but thought that personal projects were a better way of learning and a better indicator of a student’s progress in a class. She believed many professors assigned such work to simulate group collaboration in the work place, but noted that most Vanderbilt students were involved in at least one (often more) student organization which gave them experience with group dynamics and various leadership styles.  She indicated that the stress of coordinating already packed schedules among busy students and of relying on others for a portion of your final grade may be “more trouble than it’s worth.”