[Note: I prepared this guide for the faculty participating in Vanderbilt’s Coursera pilot, but I believe it will be useful to any instructor interested in using more images in presentations and lectures. It’s based on a post I wrote for the CIRTL Network last year. –Derek] 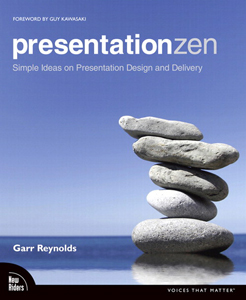 A couple of years ago, Garr Reynolds’ book Presentation Zen opened my eyes to how effective PowerPoint presentations could be. Instead of filling slide after slide with bullet-pointed text, Reynolds argues for simplicity and elegance. Select one high-quality photo that represents (concretely or metaphorically) a single idea you want to express, and fill your slide with that image. Include a word or two connected to that idea if you like, but no more than that. You don’t want the words on the screen to compete for your audience’s attention (and cognitive processing capacity) with the words coming from your mouth. Since our brains process verbal and visual inputs in parallel, an image doesn’t compete with your words.  In fact, well-chosen visuals can complement your words by helping your audience understand and remember your point.

How do I go about finding those high-quality photos? That’s where Flickr comes in. There are over 7 billion photos on Flickr, and, more importantly, many of them are (a) pretty good photos and (b) licensed under Creative Commons. 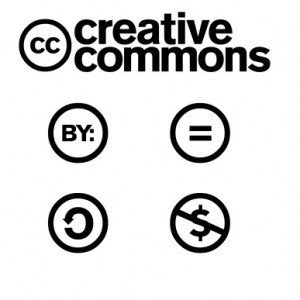 Creative Commons (CC) is important because in the United States when you take a photo, you get the copyright to that photo. That means if you want to use a photo you find online somewhere (perhaps using a Google image search), you need to contact the person who took that photo and get permission… unless that person has released the photo under Creative Commons, in which case you can use it without asking.  You’ll probably still need to attribute the photo to its creator (which is consistent with academic practice anyway), and, for your Coursera lectures, you’ll need to find Creative Commons images that are licensed for commercial use.  That means you’ll need to avoid ones that include “NC” (non-commercial) in their license.

(That’s the basics of Creative Commons.  If you’d like to know more, visit http://creativecommons.org/licenses/ for a good overview.) 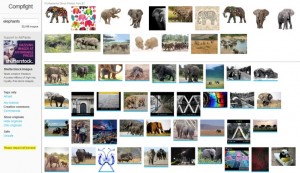 When I want to find an image for a presentation (whether I’m using Prezi or PowerPoint), I head to Compfight, which is a third-party site that makes it quick and easy to search Flickr. Type in a search term or two (like “elephants“) and you’ll see a page full of thumbnails of Flickr photos. (You’ll also see some photos from a stock photo site at the top of the page. These photos cost a little money to use. Sometimes that’s worth it, but Flickr usually has a free photo that works.) Be sure to check the Compfight settings on the left side of the screen. Make sure “Commercial” is highlighted so that you see only Creative Commons images licensed for commercial use, and toggle between “Tags only” and “All text” to help narrow or broaden your search. 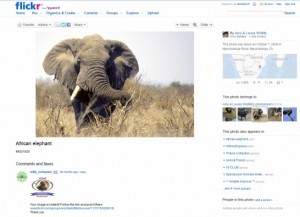 When you find a photo you like, click on it, and you’ll be taken to that photo’s page on Flickr.  If you scroll down, you’ll see the photo’s licensing information in the right-hand column.  The first few times you do this, you should confirm that you’ve selected a photo with the right license.  Look near the top of the page for the “Actions” menu, and click on “View all sizes.” You’ll see a larger version of the photo… that’s the one to save and use in your presentation. Please don’t use a tiny version of the photo and blow it up in your presentation software–it will look awful. Grab a version that’s at least 1,024 pixels on the long side if you can.  (Bigger than that isn’t really useful, given how most people will view your presentation.)

Don’t forget to include an attribution for any CC-licensed photo you use! In PowerPoint, I’ll either include attribution information (the title of the photo and the photographer’s name or Flickr handle) on the slide itself or in a credits slide at the end of the presentation (if I have a lot of photos, which I usually do).

Technical details of these steps will depend on what computer you’re using, but those are the basics of finding and using photos from Flickr in your presentations.

There’s a conceptual layer that I’ve skipped over, of course. It’s not always obvious what kind of image represents a particular concept or idea. It’s often helpful to think metaphorically instead of literally, and sometimes you have to search on a few different terms before a good metaphor comes to you. See these two posts for some examples. 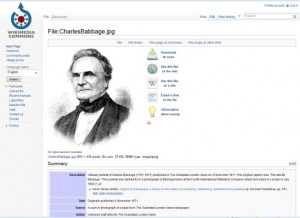 Sometimes, however, a visual metaphor won’t do, and you need to find an image of something very specific and concrete, like Charles Babbage or a kidney.  In that case, I would direct you to Wikimedia Commons, which hosts all the images you see on Wikipedia.  All of the images you’ll find on Wikimedia Commons have clear information about permission for use, and most are in the public domain, which means their copyright has expired and you’re free to use them for commercial or non-commercial purposes.  You can search for an image, click on one of the images in the results of your search, and scroll down to the fine print under the image to see if it’s safe to use.  If you have any questions about using Wikimedia Commons, feel free to ask me.