Eric Mentges (B.A., The Ohio State University) is a second-year student in the Masters of Arts program in the Classics Department at Vanderbilt. In the program, all second-year students are required to teach both semesters, and Eric has used the opportunity to explore teaching Latin with PowerPoint. 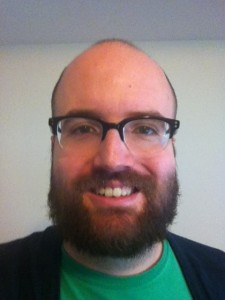 So how exactly did you start using PowerPoint?

At first, using PowerPoint seemed like a very foreign concept to me. All my instruction as a student has been chalkboard and whiteboard. These PowerPoint presentations at first seemed unusual, but now I like them. In my first semester of TA-ing, I worked with Dr. Daniel Solomon, who is the Chair of Undergraduate Studies in the Classics Department. Dr. Solomon has a whole series of color-coded slides to teach language concepts. I’ve adopted his methodology and tailored it to the specific needs of my class.

What does PowerPoint in a language classroom look like?

It is having the forms up there on the slide and available to the students. You save class time not having to write on the board, and it increases the clarity because sometimes my handwriting isn’t the best. This way instead of taking five minutes to write a chart on the board, I can put one up on a PowerPoint. It’s there forever, it’s legible, I can use it repeatedly, and no more awkward silences with my back to the class.

The content on the slides is usually definitions. This week we looked at comparative adjectives. PowerPoint is great because it is like having 30 chalkboards at your disposal, as well as being able to do things you can’t do on a chalkboard–like bold or highlight key concepts.

What are the biggest advantages of using PowerPoint?

Prepping the slides in advance helps pre-class preparation and imbues the class session with an over-arching structure, which in turn maximizes the inherently limited fifty-minute period. That being said, I’m still in the process of refining the balance between the two. Also as the material gets harder, I can tell my students before quizzes to look at the slides on OAK, and when I see them scribbling something down, I try to remind that it will be on OAK. I want them to take notes, but I also want them to focus on what I’m saying. Overall, PowerPoint saves so much time in class and gives much more clarity. 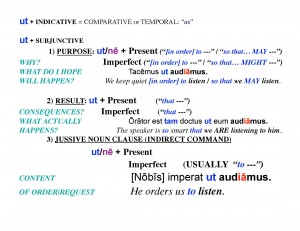 I would like to continue and maybe start using a Smartboard. I think the one disadvantage of PowerPoint is it can be a little static, and I feel a Smartboard would be more dynamic. With PowerPoint, I’m still learning how to make it more attractive and aesthetically pleasing.  I think it’s important to be engaging for a Monday 9am class on Latin grammar.

When I taught as a TA in Maymester in Greece, it was wonderful. But there it was only barebones with paper and talking, and it would have been nice to have some visual aids. In most language classrooms, all the kids are usually looking down. With PowerPoint, now everybody’s eyes are up. I can see the wheels turning, I can see if anyone is struggling, I can see what’s going on, as opposed to them having their noses in books. It’s nice to see students’ eyes, making eye contact–it means respect on both parts. So I think it has improved my teaching philosophy.