Students as Producers: Initiatives at Other Universities 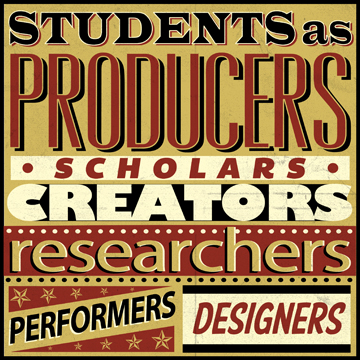 Last month, I reported that the 2014 Horizon Report on current trends in educational technology identified as one of its six key trends a shift from students as consumers (of information, of content, of knowledge) to students as creators. From the report:

“A shift is taking place in the focus of pedagogical practice on university campuses all over the world as students across a wide variety of disciplines are learning by making and creating rather than from the simple consumption of content.”

I was honored that our “Students as Producers” initiative was cited in the report as an example of this trend. Most of the other examples cited in the report are what I might call “Students as Makers” initiatives, focusing on the use of 3D printing and other technologies to engage students in creative construction of physical objects. I’m not aware of any maker spaces at Vanderbilt, although I’m a fan of the maker movement and my kids and I had fun at Nashville’s Mini Maker Faire last fall.

Our “Students as Producers” theme takes a big-tent approach, going beyond maker spaces to include a variety of ways students can become creators and producers of knowledge.  As we’ve been exploring the theme this year, I’ve learned about similar initiatives at other universities. Here are a few, providing further evidence that the Horizon Report is on to something:

Students as producers, makers, scholars. Knowledge acquisition is certainly important, but our students are capable of much more. I’m glad to see other universities prioritizing this aspect of undergraduate education.