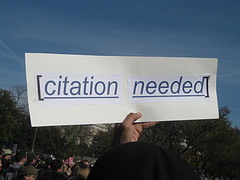 Ever wondered how to cite a tweet? Or if it was even permitted? Last week, the Modern Language Association (MLA), one of three major style sources for academic writing, released formal guidelines on how to cite tweets. An article about the new guidlines was featured in The Tennessean and USA Today in which the CFT’s Derek Bruff gives his opinion on who might be using the new guidelines most: academics.

A spokesperson for MLA said “People were asking me all the time, ‘How do I cite Twitter?’ ” and that because of the release of the guidelines a fresh conversation is getting started about sources in general: whether they’re credible and original and how citations help readers find them for themselves.

In case you’re wondering, the guidelines state that in the main text of the paper, a tweet is cited in its entirety (7.4.1). For example: Sohaib Athar noted that the presence of a helicopter at that hour was “a rare event.”

In the works cited list, you’d begin the entry with the author’s real name and, in parentheses, user name, if both are known and they differ. If only the user name is known, give it alone. Next provide the entire text of the tweet in quotation marks, without changing the capitalization. Conclude the entry with the date and time of the message and the medium of publication (Tweet). For example:

What do you think? Will you be citing tweets in upcoming papers or presentations?