SoTL Spotlight: What’s In It for Me? 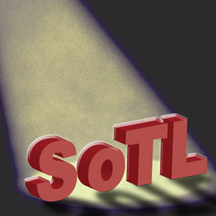 Nancy is the author of a variety of SoTL articles and book chapters, as well as co-editor of two books on signature pedagogies and co-editor of Teaching & Learning Inquiry, the official journal of the International Society for the Scholarship of Teaching and Learning (ISSOTL). “SoTL Spotlight” is her ongoing feature on the CFT website.

In my last “SoTL Spotlight,” I mentioned Harvard University’s new $40 million grant dedicated to teaching and learning initiatives, including a symposium, a consortium, some classroom redesign, and a grant program for projects to improve teaching and learning on campus. Over 250 proposals were submitted for review, and 47 projects were awarded grants for $5,000 to $50,000 (2012-2013).  The guiding principles for the projects were that they should be innovative, to “enable new educational practices and policies”; evidence-based, rather than “dependent solely on intuition or anecdote”; and extendable with products of some type that are “worth sharing, … to build community around evidence-based learning and teaching” (“Harvard”). Without using the term, Harvard is putting a significant amount of money behind the scholarship of teaching and learning (SoTL).

Such grants are effective extrinsic motivators to do evidence-based research on teaching and learning. In my previous university system, programs like Harvard’s were widespread, although on a smaller scale.  Even with less funding, a ripple effect was visible: a little support for one’s time, the help of an assistant, or the ability to bring groups together for a day or two went a long way toward shifting the culture of the institution away from one that primarily supports research and “provide[s] instruction,” toward one that also “exists to produce learning” (Barr and Tagg).  Even colleagues who weren’t funded were affected because they saw the institution, its administration, and more and more peers validating this work.

However, I’m reminded of the limits of extrinsic motivation. If the external motivator is removed—by budgetary constraints, for instance—will the work continue? That remains to be seen at my former institution.  I hope so. 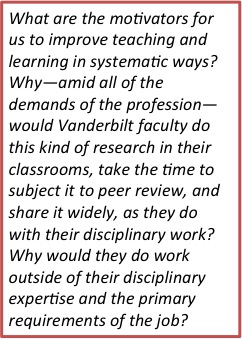 It’s an important question, though, especially for campuses like Vanderbilt, where there is no such grant program, large or small.  What are the motivators for us to improve teaching and learning in systematic ways?  Why—amid all of the demands of the profession—would Vanderbilt faculty do this kind of research in their classrooms, take the time to subject it to peer review, and share it widely, as they do with their disciplinary work?  Why would they do work outside of their disciplinary expertise and the primary requirements of the job?

There are institution-specific surveys on such questions, but I’m more interested in the findings from a broader survey of faculty from a variety of fields, ranks, and institutions (Cox, Huber, and Hutchings 133-141).  When asked why they originally got involved in this work, faculty (the majority of whom were from doctoral-level campuses) cited the following as the most important reasons:

More interestingly, when asked about the consequences of being involved in SoTL, they claim to have

At Vanderbilt, though, what motivates those doing this work?  When I sat down with Assistant Professor Tom Christenbery (School of Nursing), his enthusiasm about his projects kept bringing me back to this question.

It started with Vanderbilt’s early adoption of the Doctorate in Nursing Practice (DNP).  Although he started teaching in 1989 and arrived at Vanderbilt in 1998, he spoke of the six-year-old DNP program with great energy: “There are just so many areas to be addressed, and that’s exciting” (Christenbery, Personal Interview).  As a young program that’s now widespread across the country, its most effective teaching and learning practices are “wide open” for “pioneering” work like his.

For example, DNP students frequently have to make schematic models (similar to concept maps) of the theories they’re learning, “visually represent[ing] a theory’s concepts and the interrelationships among those concepts” (Christenbery, “Building” 250).  A colleague who teaches the course sequenced after his mentioned that the students struggle with this task, “so that got me thinking,” he said. “I went to the textbook, and there was lots of information on how to critique a model or a theory, but nothing on actually how you go about creating a model.” With no resources to help students learn this fundamental activity in the textbook, in the literature, or within the DNP Program, Tom and colleagues developed a project guiding students through the parsing of a theory to represent it visually, documented in his article in Nurse Educator.

He responded similarly to the realization that DNP students (like students everywhere) find synthesis difficult, specifically synthesizing the literature on a given topic.  Add to this challenge a fast-tracked or shortened semester for these students, and they struggle even more.  Again, this problem led to an epiphany, which led to action: “Every program requires students to synthesize the literature, but what are you doing to teach them how, instead of saying, ‘Go synthesize?’”  He and a colleague went to Vanderbilt’s Writing Studio to find out more about the teaching this higher-level skill, and they developed a workshop for students—and then a manuscript for publication, sharing their solution with disciplinary colleagues facing the same challenge.

His explanation for why he took the extra effort to develop a response to the students’ struggle—and then share it within his field—is telling:  “That’s something that inspires me:  when I see something that we’re expecting people to do but we just haven’t given them the tools to do it, or we’re expecting them to do it in a new way because they’re under different time constraints than the old model, so I want to find out what’s the best way to do it under the new model.”

The problem-epiphany-action cycle played out again with a project to help the students understand and practice peer review more effectively (Christenbery, “Manuscript”), which led to a major nursing organization using his template to guide their journal’s peer review.  From classroom to the larger field, “there’s an impact factor here,” he explains. “I was so thrilled that it had some application, that someone read it and said, ‘This is what we need because it works.’” Clear evidence that he’s contributing to his field is a powerful motivator.  He says it affirms that his work is “meaningful.”

I asked him how this work has affected his teaching, a more local impact.  “It makes me more sensitive to the learning needs of the students, the fundamental things,” he observes.  “It keeps my radar tuned in.”

Listening to him talk, I heard many of the motivators from that broad survey emerging: questions he wanted to explore, finding collaborators interested in similar questions, and connections to larger bodies of work.  I also heard effects similar to those in the survey, such as creating new assessments, changing expectations for his students’ learning, seeing the quality of his students’ learning evolve, and most clearly becoming more excited about his teaching.

He ended our conversation with something I hadn’t heard so explicitly before, but which resonated with what I’ve seen time and time again with faculty doing SoTL:  rather than seeing this research as outside of his disciplinary expertise and the primary requirements of his job, he suggests that this work has an energizing and joyful effect:  “Your brain feels different after you’ve done it. I enjoy the thinking that comes along with it.”  This consequence, while intangible, is a powerful one.