Educators across the country are flipping their classrooms and turning the traditionally-viewed roles of class time upside-down.  In a movement largely fueled by rapidly increasing access to online educational tools, the flipped classroom brings problem solving sessions and applications of content into the classroom while reserving the exposure to new material for time spent at home.  The at-home lectures are often done in the form of videos which students can pause, rewind, and review as many times as needed to digest the new material.  Students then spend class time dissecting, analyzing, and applying the content with the aid of their peers and the instructor.  Gone are the days of falling asleep in class and missing half the lecture or struggling through homework problems with no one around to help.  The flipped classroom is a simple yet radical idea with rapidly increasing support among educators.

Elementary and secondary school educators are among those voicing their support for this new movement.  Elementary school teachers in particular have been flipping their classrooms and many are doing so with the aid of Khan Academy.  Khan Academy is a non-profit organization that creates online educational videos on a large range of topics.  The organization was started by Salman Khan and began with online videos he posted on YouTube to help tutor his young cousins in mathematics.  The overwhelming support and positive feedback Khan received for the videos led him to eventually quit his job and pursue the project full-time.  Khan Academy now has over 3,000 instructional videos and is funded by big-name donors such as the Bill & Melinda Gates Foundation and Google.  The Academy also includes a problem system that generates exercises for students to work through to test their mastery of a topic.  This feature is often employed by instructors inside the classroom and includes a module in which instructors can monitor the progress of each student and thus determine exactly where and when extra help is needed.  The Khan Academy has received glowing praise from those who have used it so far and is likely to increase in popularity as word spreads. 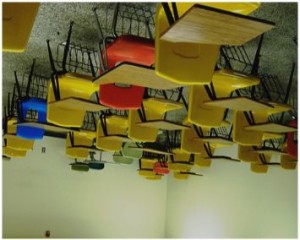 The flipped classroom model is also being employed by educators at the college level.  The University of Michigan was an early supporter of the model; its math department has been flipping its calculus classes since the mid-1990s.  Classes are 80 minutes long and usually begin with a brief lecture by an instructor who has been trained in the flipped classroom model.  The majority of class time is then spent working problems with students often asked to present solutions on the board.  Research done by the university suggests that this model is effective in increasing the conceptual understanding of the students.

Can the flipped classroom model be employed in your classes at Vanderbilt?  How effective will it be in your discipline?  What are the potential drawbacks of such a big change for the students and the instructors?  Come discuss these questions and more with your peers at the GradSTEP workshop “Flipping the Classroom” on January 26th.