Video has become an important part of higher education. It is integrated as part of traditional courses, serves as a cornerstone of many blended courses, and is often the main information delivery mechanism in MOOCs. Several meta-analyses have shown that technology can enhance learning (e.g., Schmid et al., 2014), and multiple studies have shown that video, specifically, can be a highly effective educational tool (e.g., Kay, 2012; Allen and Smith, 2012; Lloyd and Robertson, 2012; Rackaway, 2012; Hsin and Cigas, 2013). In order for video to serve as a productive part of a learning experience, however, it is important for the instructor to consider three elements for video design and implementation:

Together, these considerations provide a solid base for the development and use of video as an effective educational tool.

One of the primary considerations when constructing educational materials, including video, is cognitive load. Cognitive Load Theory, initially articulated by Sweller and colleagues (1988, 1989, 1994), suggests that memory has several components (see the figure). Sensory memory is transient, collecting information from the environment. Information from sensory memory may be selected for temporary storage and processing in working memory, 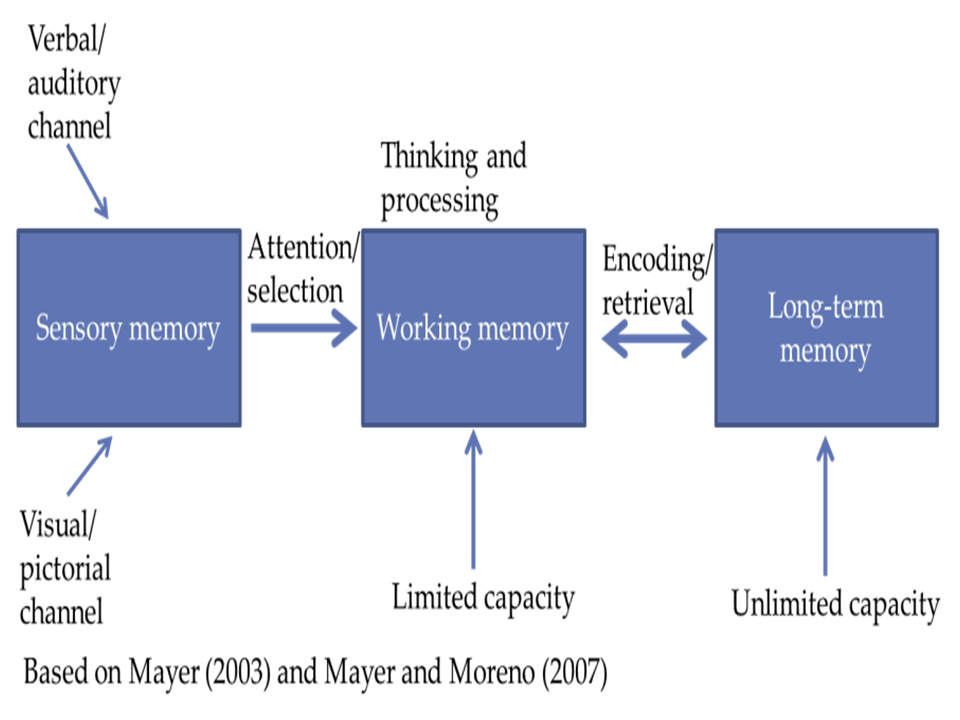 which has very limited capacity. This processing is a prerequisite for encoding into long-term memory, which has virtually unlimited capacity. Because working memory is very limited, the learner must be selective about what information from sensory memory to pay attention to during the learning process, an observation that has important implications for creating educational materials.

Based on this model of memory, Cognitive Load Theory suggests that any learning experience has three components (see the figure). The first of these is intrinsic load, which is inherent to the subject under study and is determined in part by the degrees of connectivity within the subject. The common example given to illustrate a subject with low intrinsic load is a word pair (e.g., blue = azul), whereas grammar is a subject with a high intrinsic load due to its many levels of connectivity and conditional relationships. The second component of any learning 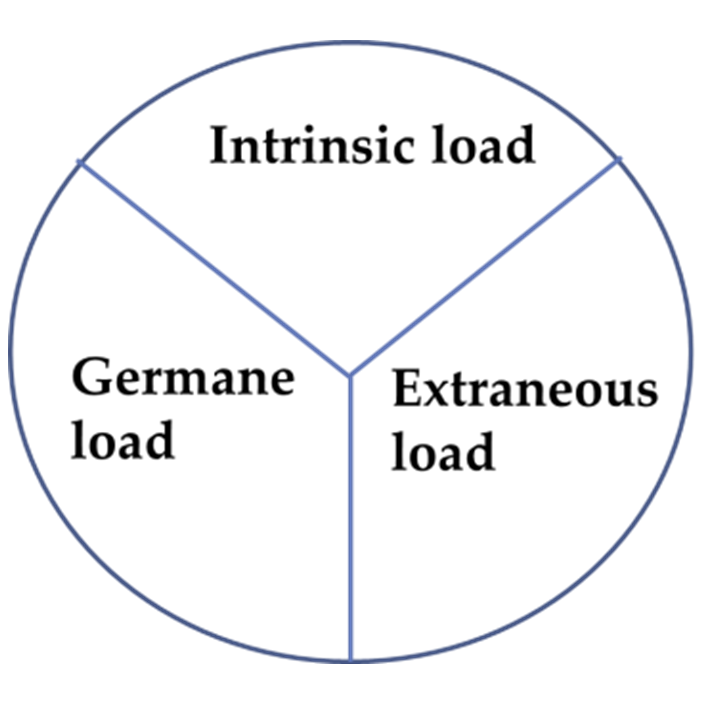 experience is  germane load, which is the level of cognitive activity necessary to reach the desired learning outcome- e.g., to make the comparisons, do the analysis, elucidate the steps necessary to master the lesson. The ultimate goal of these activities is for the learner to incorporate the subject under study into a schema of richly connected ideas. The third component of a learning experience is extraneous load, which is cognitive effort that does not help the learner toward the desired learning outcome. It is often characterized as load that arises from a poorly designed lesson (e.g., confusing instructions, extra information), but may also be load that arises due to stereotype threat or imposter syndrome. These concepts are more fully articulated and to some extent critiqued in an excellent review by de Jong (2010).

These definitions have implications for design of educational materials and experiences. Specifically, instructors should seek to minimize extraneous cognitive load and should consider the intrinsic cognitive load of the subject when constructing learning experiences, carefully structuring them when the material has high intrinsic load. Because working memory has a limited capacity, and information must be processed by working memory to be encoded in long term memory, it’s important to prompt working memory to accept, process, and send to long-term memory only the most crucial information (Ibrahim et al., 2012).

The Cognitive Theory of Multimedia Learning builds on the Cognitive Load Theory, noting that working memory has two channels for information acquisition and processing: a visual/pictorial channel and an auditory/verbal processing channel (Mayer and Moreno, 2003). Although each channel has limited capacity, the use of the two channels can facilitate the integration of new information into existing cognitive structures. By using both channels, working memory’s capacity is maximized—but either channel can be overwhelmed by high cognitive load. Thus design strategies that manage the cognitive load for both channels in multimedia learning materials promise to enhance learning. In addition to the two key assumptions of dual-channel processing and limited working memory capacity, the Cognitive Theory of Multimedia Learning also articulates the goal of any learning as “meaningful learning,” which requires cognitive processing that includes paying attention to the presented material, mentally organizing the presented material into a coherent structure, and integrating the presented material with existing knowledge (Mayer and Moreno 2003)1.

The table below gives a brief summary of how and why to use these practices.

One of the most important aspects of creating educational videos is to include elements that help promote student engagement. If students don’t watch the videos, they can’t learn from them.  Lessons on promoting student engagement derive from earlier research on multimedia instruction as well as more recent work on videos used within MOOCs. 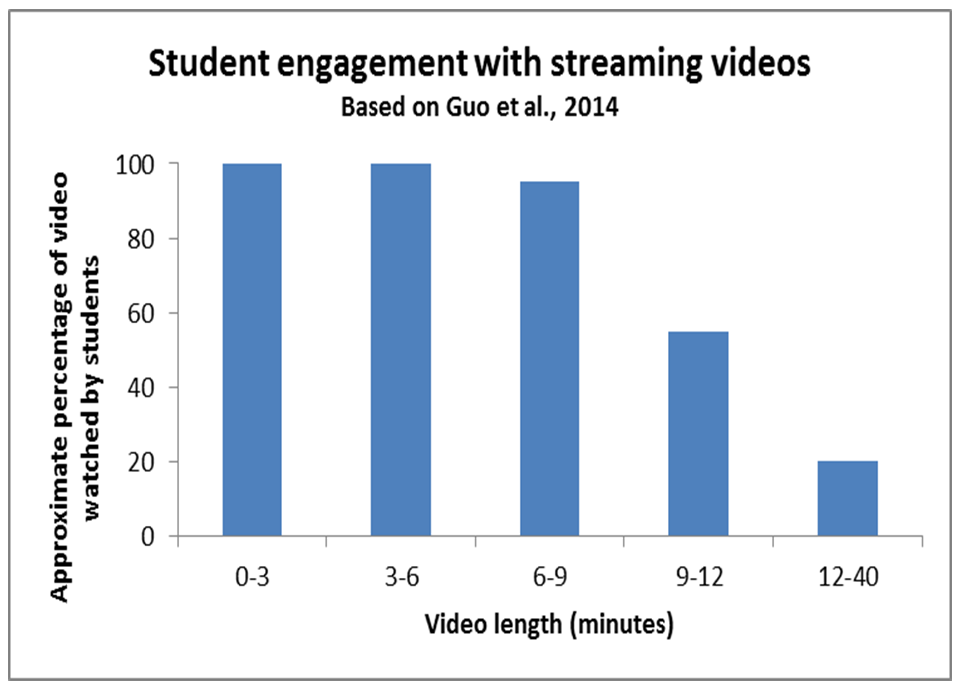 To help students get the most out of an educational video, it’s important to provide tools to help them process the information and to monitor their own understanding. There are multiple ways to do this effectively.

The important thing to keep in mind is that watching a video can be a passive experience, much as reading can be. To make the most of our educational videos, we need to help students do the processing and self-evaluation that will lead to the learning we want to see. The particular way you do this should be guided by goals of the course and the norms of your discipline.

Videos can be an effective tool in your teaching tool kit. When incorporating videos into a lesson, it’s important to keep in mind the three key components of cognitive load, elements that impact engagement, and elements that promote active learning. Luckily, consideration of these elements converges on a few recommendations:

deKoning B, Tabbers H, Rikers R, and Paas F (2009). Towards a framework for attention cueing in instructional animations: Guidelines for research and design. Educational Psychology Review 21, 113-140.

Kay RH (2012). Exploring the use of video podcasts in education: A comprehensive review of the literature. Computers in Human Behavior 28, 820-831.

Mayer RE (2008). Applying the science of learning: Evidence-based principles for the design of multimedia instruction. Cognition and Instruction 19, 177-213.

Mayer RE and Johnson CI (2008). Revising the redundancy principle in multimedia learning. Journal of Educational Psychology 100, 380-386.

Sweller J (1989). Cognitive technology: Some procedures for facilitating learning and problem-solving in mathematics and science. Journal of Educational Psychology 81, 457-466.

Thomsen A, Bridgstock R, and Willems C (2014). ‘Teachers flipping out’ beyond the online lecture: Maximising the educational potential of video. Journal of Learning Design 7, 67-78.

Vural OF (2013). The impact of a question-embedded video-based learning tool on e-learning. Educational Sciences: Theory and Practice 13, 1315-1323.